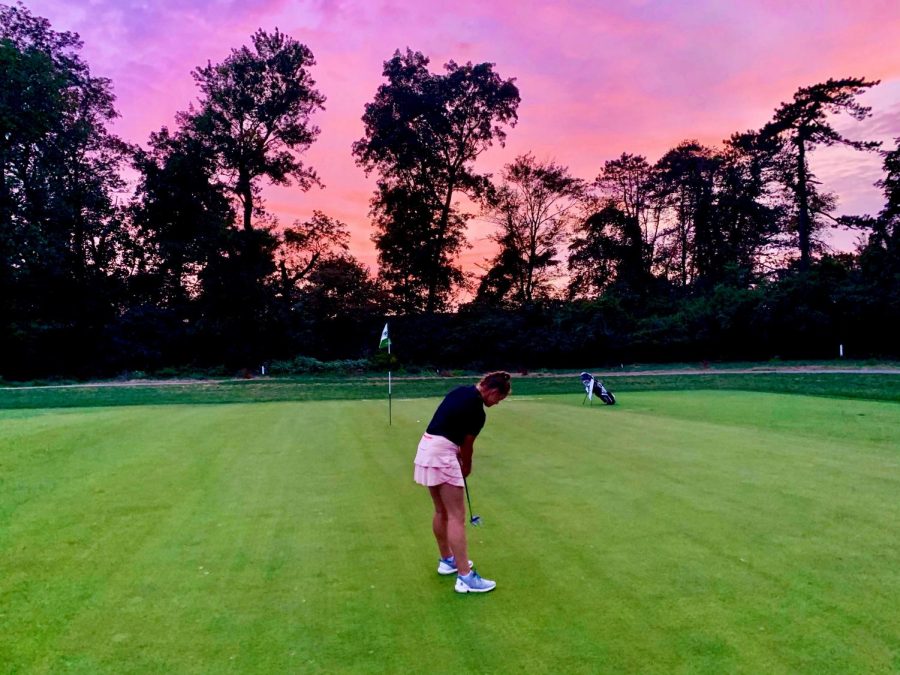 Clare Gimpel '21 goes out for a sunset swing to practice

Even though golf fulfills the guidelines of social distancing, the Mount golf team still continues to face the consequences of the pandemic.

After winning the state championship and the AACA league championship, Mount golf came off of a high from their 2019 season. With the hopes of defending their titles this year, the team did not expect what was to come.

“Everyone feels bummed, but we’re just making the best of it,” said Clare Gimpel ‘21. This is Gimpel’s fourth year on the team and she is one of the three captains this season.

In order to still practice, the team had to impose some restrictions. The girls must do daily temperature checks and also fill out a screening form before coming to practice. Whenever the players can not be six feet apart, masks must always be worn.

“We always have to be aware of what we are doing and be responsible of the stuff we have to do,” said Caroline Gola ‘22. Gola has also been on the team since her freshman year and hopes to be recruited for college.

“It’s not really the same because you are supposed to go to the campus and meet the team and see their space,” Gola said, “I don’t know how I’m supposed to make the decision of what college I want to go to if I’ve never even seen the college.”

When it came to practicing over quarantine, the team had to get creative. Gimpel, for instance, set up her own hitting booth in her backyard. “I had to use a sheet that could catch the ball so it wouldn’t hit my neighbors house,” said Gimpel. Along with that she also put a putter in her basement, practiced chipping in her lawn, meditation, and more to workout and stay fit.

With a postponed season and their matches being reduced from around twelve to only two, Mount golf had to face some major setbacks. However, the girls still continued to work hard and train throughout the year, so they are able to make the most out of what they are given.